All hungover from our arrival celebrations and started at 0920, quickly walking into rain and cloud. Passed by big waterfalls on the long valley walk past Notre Dame de la Gorge, but by the time we reached La Balme the sky had cleared, with the cloud base rising above 3000m. It was cold at the Col de Bonhomme (2329m) so we didn't hang about, with a quick lunch en route to Col de le Croix (2479m), with improving vistas as we went on, especially the sections of the Tour du Beaufortain seen from our elevation. A long grassy descent brought us to the Auberge de la Nova by 1530, at which point the 'Red Salomon' mountan biking circus was arriving by road and helicopter! Excellent refuge...very friendly.

On the hill by 0830 with a steady uphill road section, eventually turning off the road to the right on to easy but steepening paths. As we approached the col the clouds closed in completely, with strengthening winds and sleet. Crossed the Col de la Seigne (2516m), turning right at the col for 100m to avoid a large snow basin below us, then picking up an easy path below the 'refuge'. The clouds cleared, affording great views of the 'Pyramides' and, ultimately the ridges rising to Mont Blanc (Gouter and Bosses) although the summit itself was obscured by cloud. By the time we reached the Elisabetta refuge (after 4 hours) the wind had strenghthened again and the hut itself was crammed with people. Lunch on the terrace, v. cold! Good views of the Glaciers du Mont Blanc but summits of Mont Blanc and Aig. de Tre la Tete now obscured.
Walked up 250m behind the hut in the afternoon, climbing moraine between two glaciers with (disputed!) views of Mont Blanc and the Bosses ridge. Big views down the Val Veni. Bed by 2000.

A noisy night in the crowded dorm. Breakfast at 0630 and off by 0700 into light, small crystalled snow. Steep descent at first, then on to flat expanse of Val Veni. We walked quickly to the bridge by the Lac de Miage (one hour), then went steeply up the right side of the valley to reach a fine contouring path and balcony walk which we had to ourselves. There were great views back to the Elisabetta hut and across the valley to Aig. de Tre la Tete, but with cloud building up behind us. The Italian side of Mont Blanc is very impressive, with the massive Innominata and Peuterey ridges rising above us.


Then gentle downhill path to a refuge after the high point at the ridge's end (2414m), then steeply down through forest (250m) before reaching the Rifugio Monte Blanco and the road section below it. Views left to the rivers and moraine from the Miage Glacier, soon to be joined by the mighty Brenva Glacier. Views right down to Entreves, the Mont Blanc tunnel and the Val Ferret. 3km road walk in increasing temperatures to Courmayeur. Having walked for 5 hours we had a good pizza lunch, then €250 taxi ride back to les Contamines (raining here).

Rest day in les Contamines. Poor weather. Walked from Tresse to local gorge then walked back across the valley, returning to Le Quy, with pick up from Hayden in a deluge. Good dinner at 'le Husky'.

Set off with Ric at 1000, with a long drive to Megeve, Beaufort and La Chapieux (where we had walked a few days earlier). We then drove up the valley to the refuge above Le Ville des Glacier where we parked up. A steep 2.5 hour walk culminating with some rock scrambling got us to the relatively small Robert Blanc refuge at 2750m. Richard was slightly woozy with the altitude. We had good views south to the Col de la Seigne, with wind and cloud picking up towards the end of the day. Did some glacier rope technique practise below the hut, including a three pulley rescue system. Dinner at 1900 and packed for a 0400 start.

On the hill by 0430. Not a bad night although Hayden didn't sleep at all. Crossed snow slopes and took a rocky path down a couloir in the dark. Steep, unstable ground. Climbed lateral moraine before putting on crampons, then steeply up on to the Glacier des Glaciers.
Exhausting climb, finally reaching col at 0800, having been easily overtaken by a lady ski-mountaineer (turned out ot be the hut warden's missus!). Very steep, exposed climb in icy wind to summit of Dome de Neige (3592m). Superb! Views along ridge to Aig. de Tre la Tete, across to the Domes de Miage and over to Mont Blanc, which was sporting a big cloud plume. Great top.


Steep descent to col, then very tiring descent in softening snow. Off hill by 1330, followed by the long drive back, before a few beers and another session at le Husky!

Meet additional guide. Approach day for traverse of Domes de Miage 3673m.
Overnight in Conscrits Hut 2730m.
Met Ric and new guide, Dave Cummins, an understated Scot, at the chalet. Left 1030 from Le Cugnon in the Contamines valley, with a 2 hour ascent to Refuge Tre la Tete. Richard joined us to the start of the glacier before heading back. On to the Tre la Tete glacier, with a steady climb up fields of glacial rubble up to the icefall. This gave some tricky route finding and one particularly steep section where I regretted not having donned crampons. 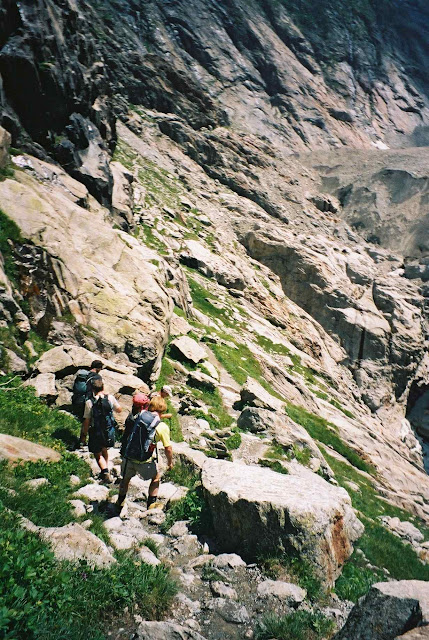 Then a very steep path up to the Conscrits refuge, arriving 1.5 hours after leaving the Tre la Tete refuge. Lazy afternoon, cake and tea. Nice dinner with inevitable Genepe to finish! Storm developed early evening and was slow to clear. Bed at 2130, and this time had an unsettled night.

0400 alarm, breakast 0415, on the hill by 0445. Clear skies and unusually warm. Crossed snow fields interspersed by rocky sections (easy walking), then on to the Glacier Tre la Tete and crampons on as soon as the ground steepened. Rising ground with a few French parties on the hill with us... a popular route. Sharp left up to the Col de Miage and I really struggled over 3300m - hard to breathe for some reason. Roped to Dave, who encouraged 'Himalayan' breathing - one breath, one step - and finally reached the col 15 minutes after Hayden, who was roped to Ric. They had started up to the highest summit of the Domes, a sharp corniced arete, but I decided to wait at the col to gather myself for the main ridge. Very anxious to complete the traverse and not have to turn back.


Had some food and drink and then on to the main ridge traverse ahead of Hayden and Ric. On to the ridge...fantastic! Everything I had expected, and more. On to the second summit with Hayden and Ric catching us up and great views to Bionnassay and the Col du Tricot, way below.
Then on to the best bit, the long corniced section which features in all the mountaineering books! I stopped Dave halfway up just to experience the exposure and verticality.
Stopped on fourth summit with views down to les Contamines to the right and Mont Tondu to the left. A long descent down very steep (40 degree) shoulder to the col before Aig. de la Berangere. Quick food break, then steep pull up to the summit of Berangere, with more narrow aretes, some delicate moves around rock sections and a final exposed snow bridge before climbing a short rock section to the summit. Again, marvellous views.


Descent down snow covered rocks and a short gully before descending interminable (30 degree) snow slopes back to the Conscrits Refuge. Got back here by 1145 and had a long soup stop to recover. Refreshed, we set off agin at 1245, down the steep track to the glacier. Crampons on again to get down the steep section of the icefall and had to negotiate some large crevasses before the boulder walk to the Refuge Tre la Tete. Hayden had an exciting moment when he fell down a (thankfully) small crevasse.
Exhausted, two hours later, into the refuge. Had a short stop, more soup, then 1 hour 20 minute yomp down to the car park at Le Cugnon, walking/running the final 300m in a storm. Off the hill by 1630!
Posted by Colin Stump at Friday, July 30, 2004

franceoutdoors said...
This comment has been removed by a blog administrator.
6:51 am