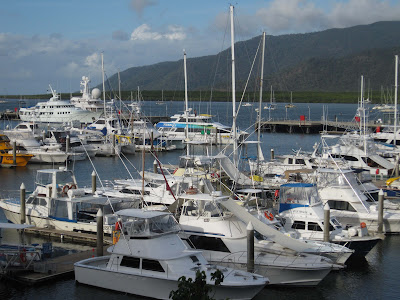 Our guide for the day was Fred Ariel, owner of Raging Thunder Adventures, a Cairns' based company specialising in white water rafting on the Barron River, and the more demanding Tully River. Fred also offers hot air ballooning from the top of the Atherton Tablelands.

During the day we drove some 250km, travelling north from Cairns to the rainforests around Cape Tribulation, the furthest point of surfaced road and power on this side of Australia. En route, albeit under slightly leaden skies at the start of the day, we enjoyed easy driving with the Coral Sea to our right and the cloud covered rainforest rising steeply above us to our left. The coastal plain supports sugar cane production and as we got further north,  small tea and banana plantations were seen.
Our first stop was 'Wildlife Habitat' just outside Port Douglas. 'Breakfast with the Birds' was our objective, with food taken in a large netted enclosure, with black cockatoos, lorikeets, and parrots flying around us. We had a quick look at the enclosures containing other regional animals, including wallaby, Lumholtz’s tree kangaroo, and a southern cassowary, the latter seen later in the wild.
We then continued north, crossing the ferry into the Daintree Rainforest, took the tree canopy walk in the Daintree Discovery Centre and enjoyed a board walk at Marrdja (between Thornton and Noah Beaches) where we had mangrove forest and a lone cassowary to ourselves. This is croc country, so care needed, even on the local beaches!﻿

Further north, we reached Cape Tribulation, the turnaround point for most day tours out of Cairns, and crossing the river here is the start point for the popular 4WD drive up to Cape York...7 days in the rainforest, and not for the faint hearted.
Returning to Cairns, we took in the more genteel town of Port Douglas, very stylish and with good restaurants, and then further south paid a quick visit to the popular Palm Cove (the Sea Temple Resort looked great).

Nice country this, but watch out for crocodiles, avoid the beaches when the 'stinger' warnings are up (a very small jellyfish that swarms in the summer off Queensland), and sandflies that bite you in the rainforest if you stop to take pictures!﻿﻿﻿ 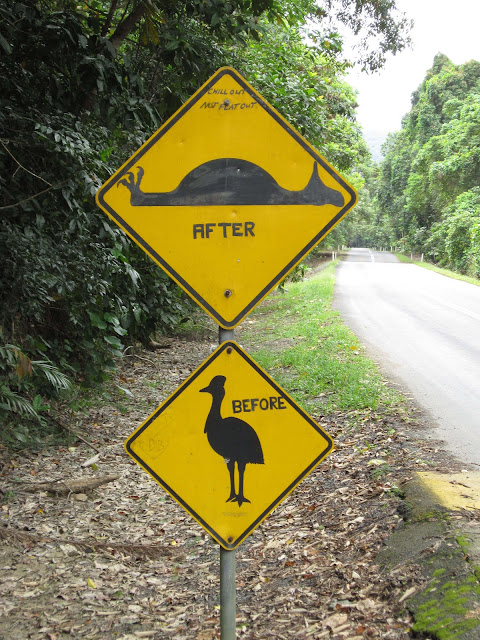 Good article. I was really enjoyed reading your post. This is truly worthy to read. Good content and good information. God bless!