12.5 hours from London. BA Premium Economy outbound to Singapore on a Boeing 777 that had a very poorly maintained cabin and thin blankets. Notably inferior to Qantas which was used for the leg down to Sydney.
Changi uncrowded and efficient, city centre only 25 minutes by taxi. Taxis are friendly and inexpensive.
Park Hotel Clarke Quay comfortable, but crowding in breakfast room was irritating. Located at the top end of the popular tourist attractions, bars, clubs and restaurants located around Clarke Quay, just north of the old colonial district and CBD.
Fast and efficient underground MRT in the city, but ticket machines can lead to frustations and long queues.
A quick visit to Little India, somewhat untidy compared to the sterility of the city centre, and very much like visiting India itself with the smell of spices pervading the market areas. A Hindu wedding observed at the Sri Veeramakaliamman temple on Serangoon Road.


The Marina is a true spectacle, overlooked by the verticality of the bank and insurance buildings to the west, and bordered by the amazing Marina Bay Sands, a luxury hotel with a construction feature capping the three towers of the building which resembles the hull and superstructure of a cruise liner, the Sands SkyPark. In front of the hotel is the luxury shopping mall and various expo galleries and futuristic structure of the ArtScience Museum projecting out into the marina. To the east is the ferris wheel Singapore Flyer and the Floating Stage which acts as a viewpoint for the Singapore F1 event. 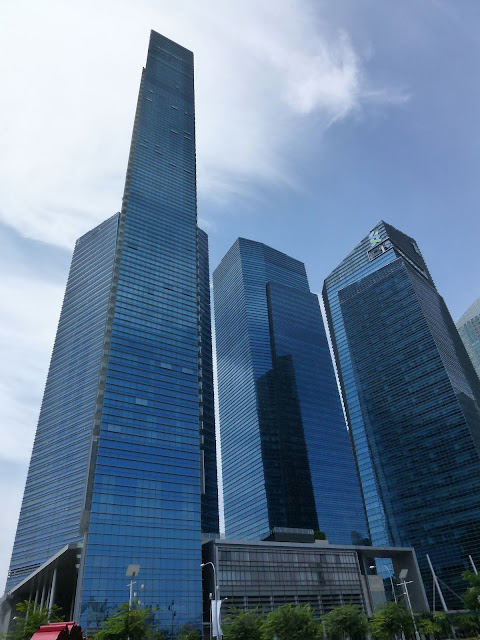 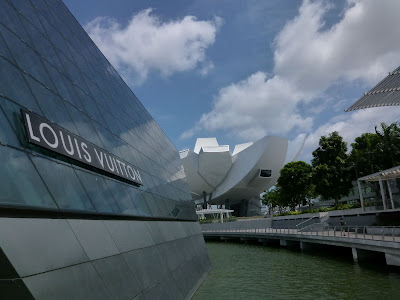 The Long Bar at Raffles was, as expected, somewhat underwhelming, but it's essential to have a famed Singapore Sling in this historic building. One quirk of the bar is that shells from the freely provided groundnuts are just swept off the tables on to the floor, a hangover from bygone days. 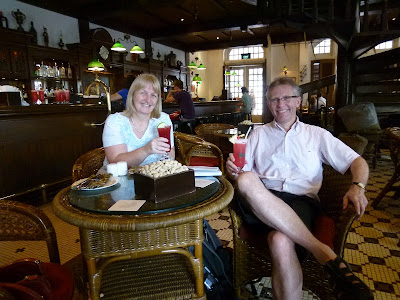 A quick taxi ride back to the hotel, passing the War Memorial which the locals call the 'Chopsticks', the Padang adjacent to the Cricket Club, and Parliament House.

Dinner in Chinatown, preceded by a quick look at the Sri Mariamman temple, and somewhat enlivened by the Chinese New Year celebrations (Year of the Dragon). Excellent food, including tofu in chilli oil. 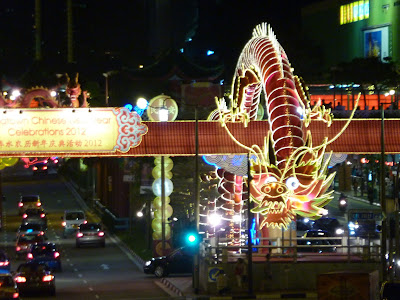 Following morning spent walking around Clarke Quay (reverse bungee and extreme swing part of the attraction here), spotting the colourful Ministry of Communiactions building,  followed by a yomp at the south end of the island, walking up the hill to Faber Point (which can be reached by cable car) with views back to the city, the huge dockyards, and directly south to the shopping, entertainment complexes and beaches of Vivo City and Sentosa Island. 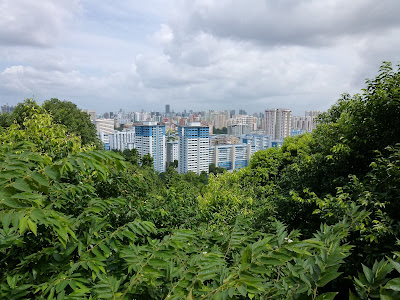 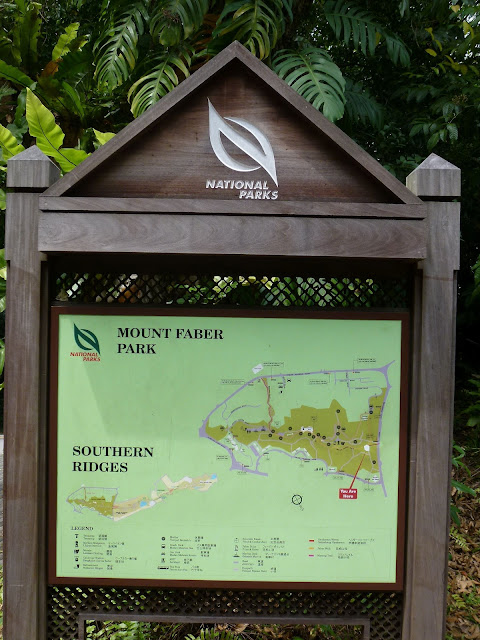 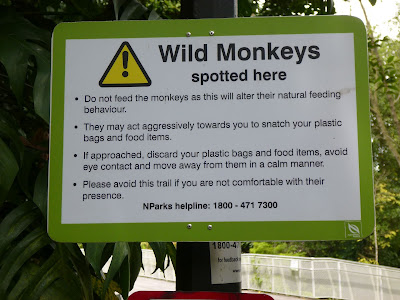 Verdant vegetation up here, with warnings about wild monkeys, and peaceful respite from city below. Walked two sections of the Southern Ridge trail, the Forest Walk accessed across the 274m long 'Henderson Wave' a futuristic bridge constructed 36m above a highway, and then quickly descending to Harbour Point via the Marang Trail. 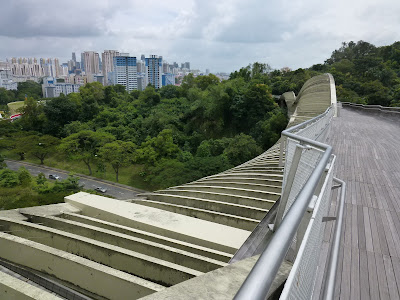 A quick beer in the Brewerkz micro-brewery in Clarke Quay, then off to the airport for the onward journey to Sydney, just over 7 hours flying time from here.
Posted by Colin Stump at Thursday, January 26, 2012