The year 2013 has seen some weird weather, and it's not just been a UK phenomenon. Arriving in Slovenia at the end of May, I faced heavy rain and temperatures barely into single figures as I landed at Ljubljana airport.
The result, empty hotels and mountain paths devoid of people.
Slovenia, east of Italy, south of Austria, north of Croatia and west of Hungary, became an independent republic when it split from Yugoslavia in 1991, and normally relies on Italian, Austrian and German tourists travelling overland for business. So they stay away when the weather is poor.
Their loss. My gain.
Although the weather stayed unpredictable, one initial wet day in the hills, doing a circuit around the town of Kranjska Gora in the north west up close to the Austrian border, the next couple of days walking the famed Soška Pot trail and visiting mountain fortresses and WW1 defences around the town of Bovec to the south west were, thankfully, in dry conditions.
The walking in Slovenia is well waymarked, as in many European countries, although it is notable just how many diversions constantly have to be added due to erosion, rockfall and landslides. This part of Europe is on the seismically active southern boundary of the Eurasian tectonic plate on the north-western boundary of the Mediterranean-Himalayan seismic belt, which is one of the most seismically active zones on Earth. A 5.6 level earthquake was recorded in 1998 in the Krn mountains south east of Bovec, and a 5.2 rated event just north west of the previous epicentre in 2004.
But don't let that put you off.

Walking here has been a delight, some challenging paths, a pristine environment, lush wild flowers in the meadows and mixed beech and pine forest at the lower elevations, yielding to impressive limestone peaks, with the snow line presently at about 2000m.
Around Kranjska Gora the rainclouds sometimes parted enough to give tantalising views of the northern mountains of the Julian Alps, fine peaks like Prisank 2547m and Razor 2601m, and the vertiginous summit of Jalovec 2645m to the south west. But most views remained elusive as I hunkered down to walk a sodden 25km.

Next day, to reach the delightful Soča valley route (Soška Pot) from the Kugy monument, a transfer took me up and down the 50 hairpin bends of the Vršič Pass. Just 24 hours before, 11cms of snow had fallen here, so my driver was much relieved when we summited with only a little slush on the surface.
The Kugy monument commemorates Dr Julias Kugy, a pioneer of mountaineering in this part of the world. It's a fine bronze figure erected by the Slovenian Alpine Association in his memory.

The route takes you down through the Trenta Valley, which ultimately becomes the Soča valley, turquoise waters smashing down gorges and rapids, and a constant companion all day. The highest mountain in Slovenia, Triglav 2864m, was in view today. Apparently, all Slovenians see it as their patriotic task to climb it during their lifetime. The summit approach is on a sharp rocky ridge with ladders and chains for protection, and it gets very crowded in season. Somehow, I don't think it'll make my 'bucket list.'

From Bovec I walked a section of the Walk of Peace, Pot Miru, which interconnects the  rich cultural and natural heritage along the onetime Isonzo Front. It is a memorial to all who suffered in WW1 and a reminder to us all of the futility of war. The day started at the trenches and caves dug by the Austro-Hungarian troops before they finally pushed back the invading Italian army with gas in 1917. I had the place to myself, and it was eery.

Further up towards the Predel Pass and the Italian border, I visited the Kluže and Hermann fortresses which guarded the Koritnica valley from foreign incursions, the former originally established in1420 against Germanic and Turkish invasions, and subsequently taken by Napoleon and later by the Italians in WW1. There are great views to be had from the Hermann fortress, accessed through a 100m long tunnel (not lit) and a lofty path which traverses the limestone cliffs. Around Bovec there are some fine mountains peering down on you, the bulk of Rombon 2208m dominating the skyline, although the lower but perfect pyramidal peak of Svinjak 1653m wins my vote.

Once again, I've been walking a route organised by Headwater, who design the route, provide detailed walking notes and fix the hotels and the transfer of your luggage between them.
Later in the week I continued my journey into Slovenia. A long day's walking from Bovec brought me to the bustling little town of Kobarid, en route a diversion necessary to get me  around a recent landslide. Leaving Bovec, the mountains to the west and north were formidable sights in the early morning light, the summit of Rombon revealing itself more clearly and the glaciated ridge from Visoki Kanin 2587m to the ski area below Mt Forato 2498m standing in stark relief against a crystal blue sky. 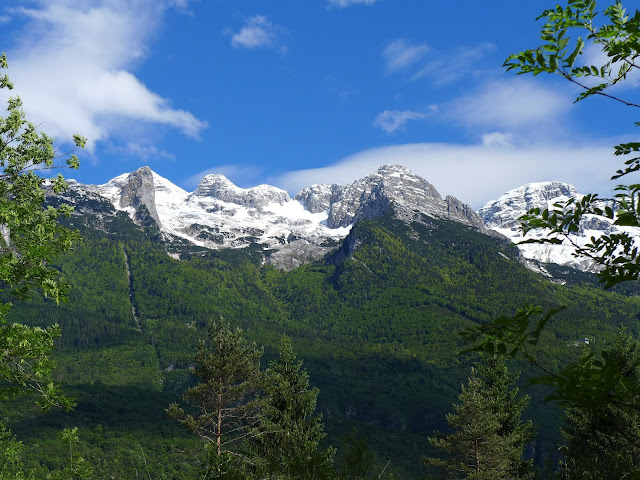 The route took me through the quiet village of Çezsoča, devastated by the 2004 earthquake but now a model of rural tranquility. Further along the Soča valley, rafters and kayakers raced down the tumbling waters of this beautiful river, braving grade 4 and 5 rapids in places. Rather them than me.
From Kobarid there's a historical trail, my objective next day.
Historical trail!? Stump doesn't do these...he only wants high mountain paths, I hear you say. But this is Slovenia. And their historical trail involves plenty of hills, narrow paths, and after one diversion to an obscure viewpoint, an unexpected wildlife experience! A bright start on this particular day, so off early to get good light for photography.

The first port of call, an impressive and stylish monument to the Italian dead of WW1 above Kobarid. Then, a steep little variant to a viewpoint high above Kobarid. And this is where there was some excitement. First a stand off with a large male chamois, well, until he got bored, sniffed loudly and bounded up a nearby cliff, as you do...Then on the descent, my first run in with a proper snake. Hissing loudly, a metre long black Gad (or it could have been a Goś), seemed a bit upset when I disturbed it's morning warm-up when I bounded back down the path. Needless to say, I spent the rest of the day wary of every tree root and branch that I happened upon during the remainder of the walk!

Onwards. Up to visit the ancient hilltop settlement of Tonocov Grad, then steeply down through the Italian trenches dug in WW1, before an interesting walk on an elevated platform to view the stunning Kozjak waterfall which falls 15m into a cave, and then more WW1 defensive positions. An interesting morning, which helped me work up a thirst ;-)

Incidentally, the museum in Kobarid, the Kobariški Muzej, is excellent and thought provoking. It mainly covers the events of WW1 along the Soča/Isonzo front when the Italian and Austro-Hungarian forces were ranged against each other. Recommended.
Next, a journey by train from Most na Soči to Bohinjskà Bistrica, en route to my next base in Ribčev Laz, on the edge of Lake Bohinj. A more commercialised area this, with lots of coach parties coming and going, but by the end of the day the lake was perfectly calm, very few people left in the valley, and it was gloriously peaceful. 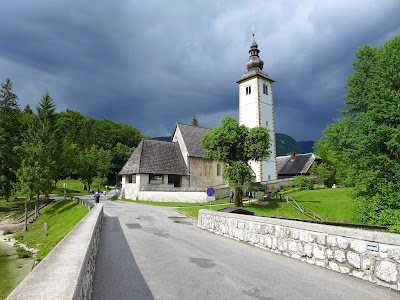 My last full day in Slovenia can be described as a 'B' day: bus, balcon (high level walk from the top station of the Vogel cable car), boat, bike (a good ride in the valley, along the lakeside and in surrounding villages) and, predictably, beer. A good end to a thoroughly enjoyable trip.

A few other points about Slovenia.
Slovenian food is fairly typical Alpine fodder - dried meats, grilled meats and cheese, but highlights were the simple potato served with ewes milk cottage cheese at the Metoja restaurant in the Trenta valley, and the trout cooked in butter made from goats milk served at the Dobra Vila hotel in Bovec. And the local beer Laško came out tops for me.
What has struck me over the last week is how thoroughly modern and efficient Slovenia is, but without the crowds that other Alpine countries attract, and offering far better value for money. The people are genuinely friendly and universally helpful, and there is great pride in their history and the general upkeep of their environment. I can honestly say I saw no litter, anywhere. And just to look at how beautifully their gardens and vegetable plots are tended tells you a lot about this country.
One final thought drawn from that most famous of horror movie lines...'don't look back.'
It might be the effect of my mother's recent passing, or the memory of a sign board on the Soška Pot trail which said that brown bear and lynx sometimes wander into this region, or maybe just the sound of rain drops falling in the undergrowth, but some of the more remote forest sections definitely felt spooky. The moral of the story is...bring a walking companion next time!
Slovenia is too good to keep to yourself. Put it on your list. 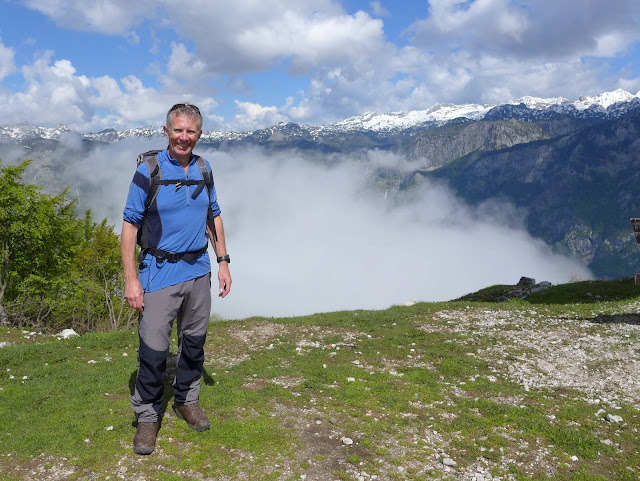 Really interesting. I have become interested in the legacy of WW1 on the Alpine front and I am thinking of walking some of the area you have covered. Nice photos too.

I did actually visit Slovenia in 2015, retracing many of the steps in the blog. Beautiful, although many of the WW1 sites are looking overgrown and neglected. My son flies out today to explore the foodie aspects of Ljubljana and beyond.