After many years of clambering over high mountains and trekking some of the world's classic routes, it's easy to get complacent about the hills.
So, the plan was to do some easy walking in the pretty alpine region of the Haut Chablais, the area just south of Lake Geneva (Lac Leman) with mountains a little over 2400m in height close to the French-Swiss border. A few hours a day, then a well-earned beer or two to rehydrate.
Yeh, right.
I hadn't reckoned on a heatwave (31C by 09:00 at 2000m, peaking at 34C a few hours later), nasty little biting flies known locally as taon, numerous paths wiped out by landslides (heavy rain accompanied the usual snow melt back in May), and a number of tracks now closed off by farmers and new ski lift and piste development. Châtel might be a paradise for skiers and mountain bikers, but walkers seem to take second-fiddle right now... 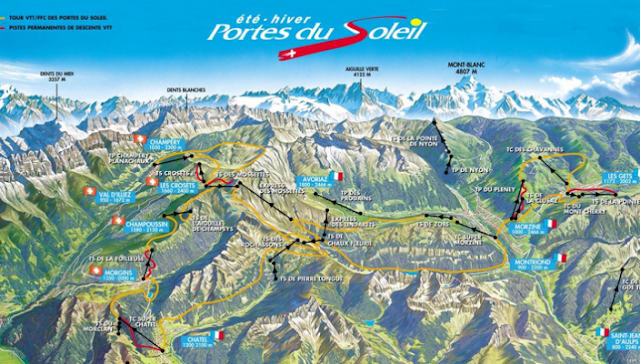 Ah, did I just mention mountain bikers? Yep, guess who was walking during the annual Pass'portes de Soleil three day event? The mountains were teeming with MTB riders, who, it is fair to say, were extremely careful passing us foot-driven types, flashing past with a cheery 'bonjour' as they careered down the mountain. Hmmm. And three helicopters seen during the day of my climb up Mont de Grange meant that some of them didn't complete the weekend either.
But, cosseted with the travel arrangements made by Headwater, the expert walking holiday company, with great family run hotels and luggage moved from point to point as I circumambulated the region, I was up for the challenge!
The first few days were spent walking from Les Gets to Lac de Montriond, and then on to Châtel. My route took in the summit of Mont Chéry 1826m (and, no, I didn't use the ski lifts...), steeply down to the Col de l'Encrenaz, and then down to the lovely little Hotel les Sapins, at the western end of Lac de Montriond. A good warm up, followed by a ridge route called the 'Super-Morzine,' albeit with a punishing descent through the forest later in the day. 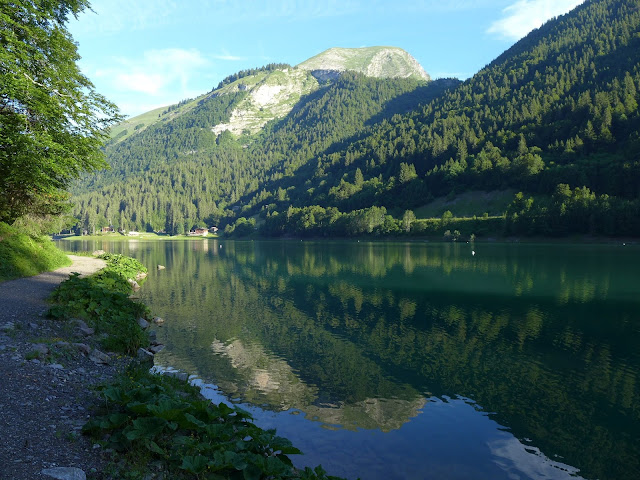 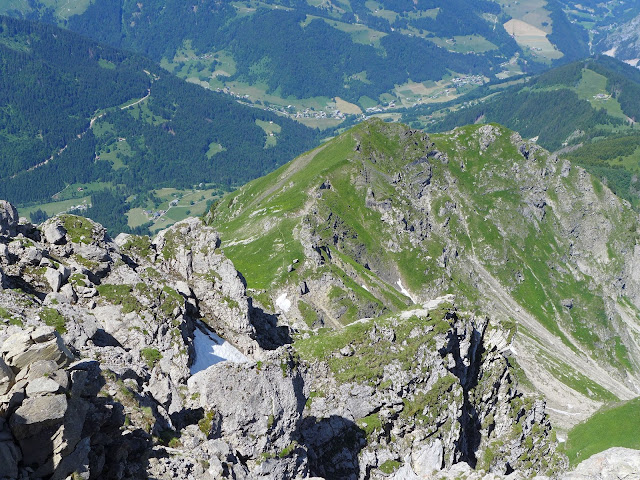 A 'rest day' in Châtel had me clambering up local hills, although thwarted by new piste construction and new lift systems. And one local farmer who's decided he's had enough of walkers. I can think of better places to base yourself for walking in the Alps...

But, onwards! Leaving Châtel behind, an early start got me to the summit of Le Morclan 1970m, right on the French-Swiss border, and then followed a delightful ridge along it, scrambling over the Pointe des Ombrieux 1978m, before a long descent through alpine meadows lush with flowers to the little village of la Chapelle d'Abondance. Glorious walking, but the heat was starting to build by now.


La Chapelle d'Abondance served as the base for a climb up les Cornettes de Bise, which, at the same altitude as Mont de Grange, 2432m, shares the accolade of being the region's highest summit. My route took me up some very steep forest paths to the hidden Lac d'Arvouin, along the challenging little path from Col de Serpentin (1832m) to Col de Vernaz (1615m), and then on to the lower grassy flanks of the main peak itself.
At higher elevations, the route takes you up through outcrops of limestone, steep but never difficult, with the alpine route markers (white/red paint flashes on the rocks) helping you find your way up through the crags and avoiding some banks of old snow. This is a great summit, with airy views down to Lake Geneva, the Rhone valley far below, and a vast array of French and Swiss peaks. 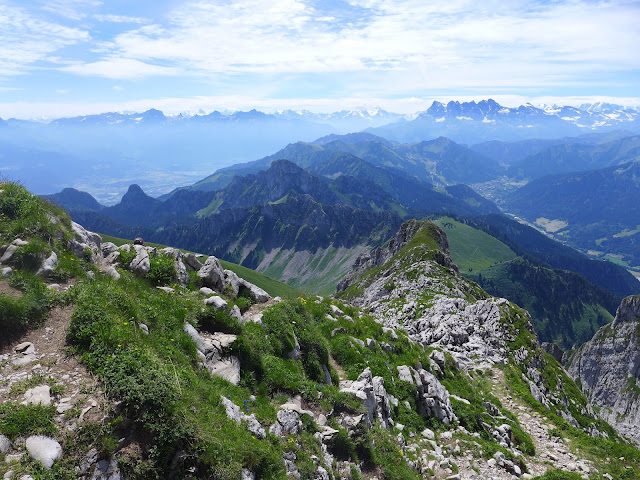 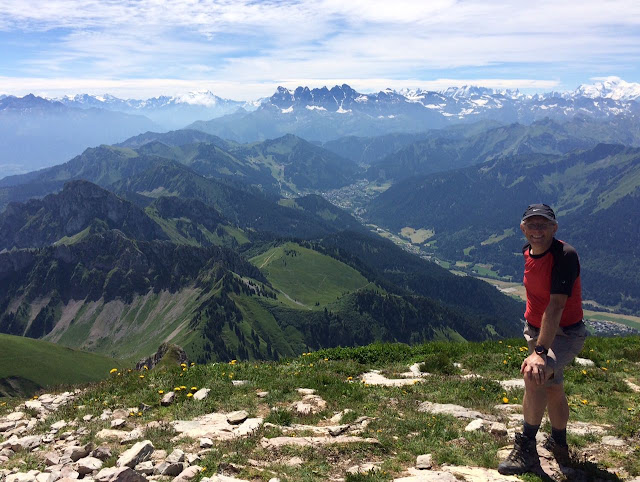 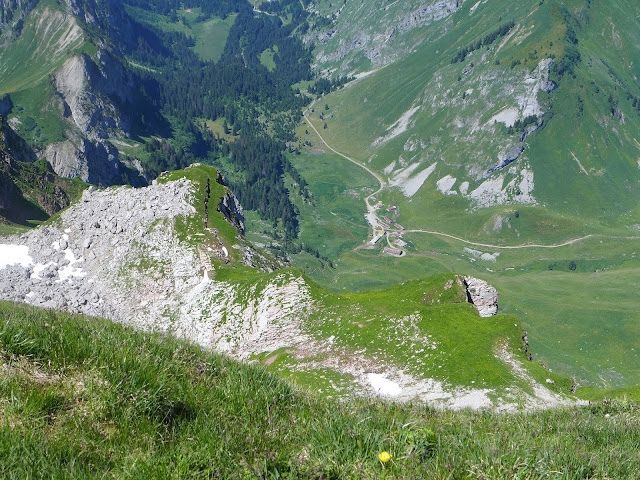 From la Chapelle d'Abondance a walk across the Col d'Ubine (although extreme heat deterred me from scrambling along the adjacent Pointe de Lachau ridge) brought me to the lovely little town of Abondance, with a couple of nights to spend at the delightful Hotel de l'Abbaye.
From here I explored the high alpine pastures and forests around the Pointe des Follys, although the taon were out to get me that day, and my final big walk took me over to St-Jean-d'Aulps via the Col de Tavaneuse 1997m, followed by a very long descent down gravel tracks and then one of the steepest forest paths I have ever encountered, demanding knee surgery and a lot of beer at the other end ;-) 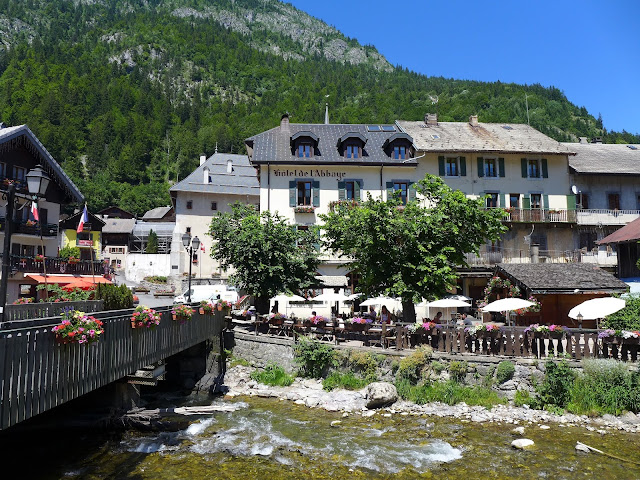 In summary, this is a great area for walking, as long as you choose your routes carefully. Paths are changing rapidly due to MTB and ski route development, so check with your hotel and local tourist information office before you set off. Definitely put the Mont de Grange and les Cornettes de Bise on your 'must do' list though!