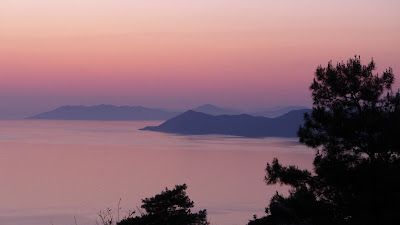 It's early season for walking in Turkey, but arriving in Dalaman after a four and half hour flight from Birmingham I was certainly ready for a bit of a warm after the cold hard winter we've endured in the UK this year.
Dalaman airport was virtually deserted, as was the new road that twists its way through vertiginous country south to my first base in Kayaköy. Home for the next two nights is the Villa Rhapsody www.villarhapsody.com just outside Kayaköy, the village below the site of a large deserted settlement (Kaya) that used to be inhabited by Greeks before forced repatriation to their own country in 1923 following a failed Greek invasion attempt.
The first night here was 'amusing.' Early to bed, a few random dogs barking first, then the local toads started croaking, followed by a seriously confused cockerel sounding off (0115 to be precise), then gunshots (locals hunting wild boar) and then I discovered I had a mozzy in my room (by the end of the night three had been culled...bloody things!). A disturbed night...earplugs in future! On the second night a hee-hawing donkey decided to add to the cacophony. Ho hum...
It's a spooky spot, the old village of Kaya, nestled up against a hill and with several churches, one next to a building that houses, to this day, human bones, and most buildings now in a state of advanced decay. 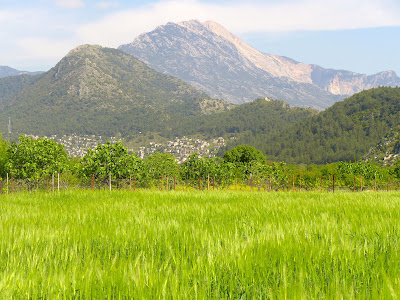 My warm up walk took me through the ruins then over a saddle through pine forest on a rocky limestone track to the beach resort of Olu Deniz, home to a lagoon, a wide beach and many paragliders, the air above festooned with them soaring the thermals on arrival.
The little hotel in Kayaköy is a real find, with great hosts Atilla and Jeanne and good grub, plus the excellent Turkish brew, Efes, a delightfully fresh pilsner style lager at 5% abv. Yum.
They leant me a mountain bike for the afternoon and a pleasant excursion in the afternoon sun took me to the beautiful viewpoint above Gemiler Beach, the sea a radiant turquoise hue. A nice start to the week.

The second day took me from the hamlet of Ovacik, along the Lycian Way with stunning coastal scenery, then below the Baba Dag Mountain to Kirme, and on to the tiny village of Faralya. Occasionally tortoises would be seen meandering (slowly!) on the path.

Faralya is set high above the sea and gets the benefit of cooling breezes (so no mozzies in the room) and is delightfully quiet. The Faralya Hotel www.ecoyuva.org is owned by Atilla and Caroline, and is run as an eco-friendly spot, featuring vegetarian food to a high standard and excellent facilities for visiting yoga groups. A very chilled spot and early morning yoga was enjoyed in complete solitude.

The next day was spent getting lost on the faint cliff top paths below the hotel, and visiting the retreat known as Yuva, associated with the hotel. My legendary lack of sense of direction led to some interesting diversions, but also the discovery of some great viewpoints over the 'Butterfly Valley' deep below Faralya.

Between Faralya and Alinca, the next day's walk involved a long climb up through the massive Kabak Gorge, hot work in the midday sun, about 26C, but rewarded with exceptional rock scenery accessed from a good path, well waymarked most of the way. 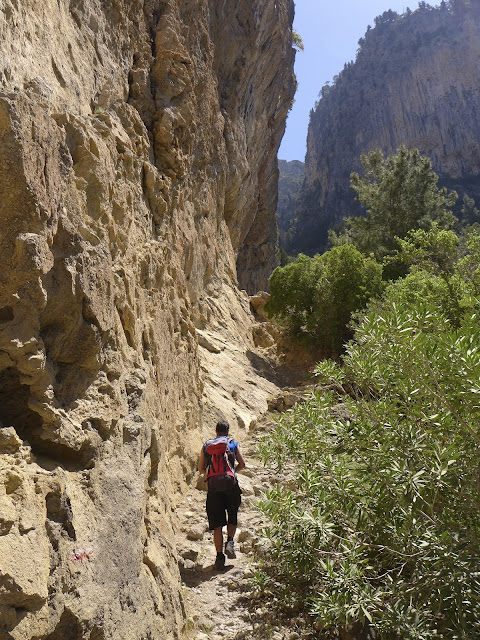 Accommodation for the night was in Patara, just beyond Xanthos ('the tomato capital of Turkey', with thousands of acres in the surrounding valley covered by greenhouses). Patara is the site of many ancient ruins, Lycian and Roman in origin, as the town was an important harbour in history, before it silted up. Only lagoons can be seen now, with a vast area of ruined buildings including a large Roman amphitheatre. Beyond the ruins is a long beach, famous for its fine sand and large dunes.

Thankfully, the hotel in Patara had mozzie nets, so a peaceful night ensued, although I always appreciate the early morning call to prayer from the local mosque...
The next day was one of exploration. Using Kate Clow's guide to the Lycian Way, the route went from Cavdir to Üzümlü, not a particularly long day, but walking very narrow and exposed sections of the Xanthos Aqueduct. Narrow aqueduct bridges to cross, straddling a narrow water channel filled with gushing water in one section, and hugging the aqueduct walls in places, with some big drops below. I'd describe it as a 'sporting route', but not one for the faint hearted!

The evening was spent in the bustling 'adventure capital of Turkey', Kaş, a 45 minute car journey from Patara along a spectacular coastal road. Great company and fine food completed a good day.
My final day on the Lycian Way was the easy and very pleasant route from Patara to Akbel, close to my final resting point on the coast, Kalkan. The route takes you through cool pine forests and numerous olive groves, eventually reaching the massive wall of the Patara aqueduct affording great views to the Xanthos Valley in one direction and the turquoise waters of Kalkan Bay to the east.

The path, whilst simple to follow, took me through a few kilometres of dense maquis, so long trousers were a real boon. My guide spotted a couple of snakes, one thin silver specimen and a longer black snake, which had him jumping into the air, but they moved out of his way quicker than he theirs!
The final stage of the trip involved a pleasant walk around the small but thriving harbour of Kalkan, with two restaurants notable for their food, albeit at London prices: the Aubergine and Trio are both well worth a visit.

Even 'pre-season', Turkey can be very hot. At the end of April, the temperature in Kalkan was 30C, and unless the authorities have started spraying the mosquito breeding areas, there can be a few mozzies to annoy you at dawn and dusk in some locations. Apparently, the mozzie problem lessens as the heat really starts to rise from May onwards. May and September seem to be the preferred time to walk the Lycian Way, as the heat during high summer would be unbearable, but even in April an early morning start makes for more comfortable walking (followed by a nice lazy afternoon).

Walking the Lycian Way can be very straightforward in places, especially if you're following routes planned by walking specialists like Headwater, but I would counsel that the 'definitive' guidebook by Kate Clow can be a little lacking on detail, and on some sections of the trail a new government way-marking system has superseded some older waymarks and the paths are often festooned with a confusing variety of markings - red dots, arrows, red/yellow marks, red/white marks, and random blue dots and yellow arrows, not to mention signs for local hotels and bars! But the main Lycian Way sections stick to a parallel red/white sign convention, and you'd be very unlucky to get seriously lost.
The paths themselves can be tractor tracks, narrow rocky paths, and on some aqueduct sections the water channel itself. Generally easy walking, with fine views to the coast.
The local people are very friendly, and almost without exception you'll be greeted with a friendly wave or nod as you walk through the small villages. Local dogs can occasionally be troublesome, but on this route there were no real issues, one well known pesky little dog below Faralya likes to yap a lot, but soon backs off. I invested in a Dazar device, which emits sound at a frequency that only dogs can hear, and on a couple of occasions used it to distract (successfully) barking dogs on the route. The other thing to watch out for are beehives. There are many along this section of the Lycian Way, producing a fine pine honey, but should be given a wide berth if the owners are smoking them to harvest the honey.
You'll see tortoise, lizards and squirrels en route. Birds like blue crows, falcons and bee-eaters add to the interest. Snakes will be well out of your way before you reach them, and wild boars love to sleep during the day, so don't expect to see much of them either (except, perhaps, on a plate!).
In all, it was a moderately challenging week in glorious weather, with good food everywhere and unpretentious hospitality. I'll be back to Turkey, there were some higher mountains inland, still snow-capped in April, begging to be climbed...

Nice blog of your trek. Kept me reading the entire time right till the appropriate bottle of Efes Pilsner to finish it off! Really liked your descriptions of issues along the trail such as the dogs and bees nests. Travelers have done an amazing job of mapping out the trek over the past few years and sharing the information.

Thanks for the read.